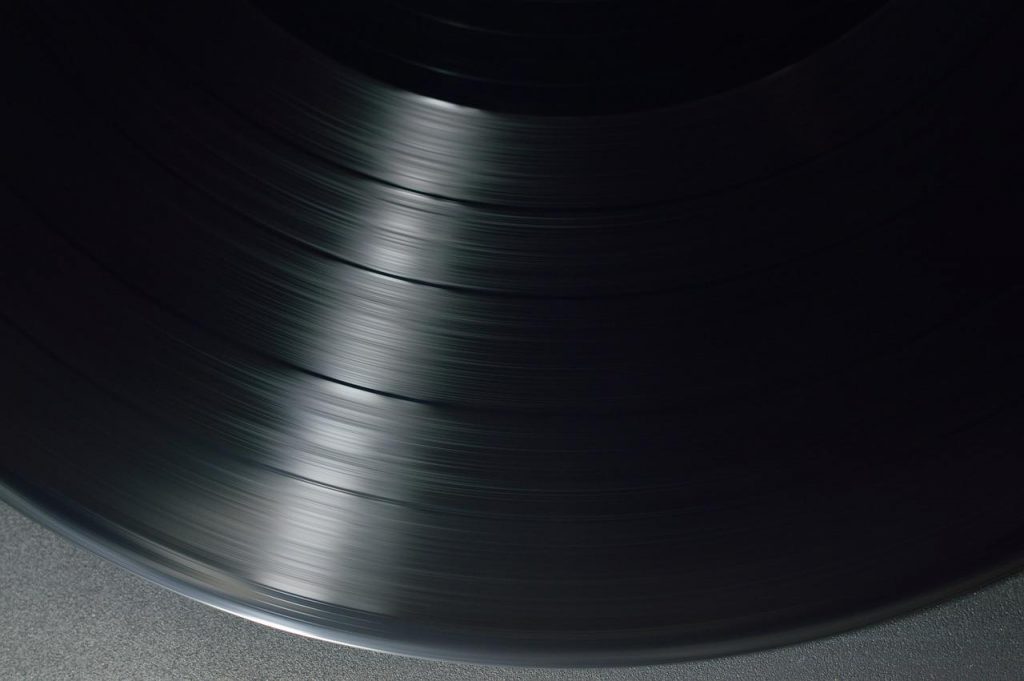 admin June 23, 2022
Football: shared memories of great players, the not-so-great players who fouled them, World Cups, triumphs, near-misses and disasters; more personal recollections of muddy school pitches, away trips to grounds in the back of beyond, pools wins and Subbuteo.
Football: Designing the Beautiful Game at the Design Museum in London brings it all flooding back. No dry display, this, as you might fear, of how the equipment and stadiums of the world’s most popular sport have been optimised and marketed down the years; it’s a show that pulls you in and holds your interest through the full 90 minutes and into extra time.
Top-level soccer these days is such a slick, modern entertainment product, you can easily forget the way it used to be. The curators take you right back to the game’s Victorian beginnings: A Harrow School ball looks more like a pouffe — it’s easier to imagine sitting on it than kicking it or heading it — while the heavy leather boots of the type worn by the Corinthians seem more suitable for a hard day in the factory than running round a pitch.
It was after World War II that modern kit started to evolve, and the Germans were at the forefront. Puma’s Super Atom boots were revolutionary when they were launched in 1952 — possibly the first to feature screw-in, rather than fixed, studs, which meant that you could use longer or shorter ones to suit the conditions. Puma was founded by Rudolf Dassler; his brother Adolf founded the rival Adidas; what better competition could you have? 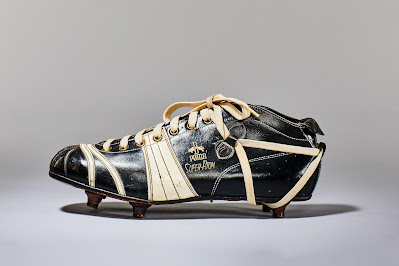 West German national team manager Sepp Herberger helped to design the new style of boot, and in 1954, Herberger’s side took advantage of the innovation to defeat the hot favourites, Hungary, in heavy rain in the World Cup Final in Switzerland, a match that’s gone down in history as the Miracle of Berne. Vorsprung durch Technik. And of course, the Germans have been doing it ever since.

Efficiency, organisation, preparation: the hallmarks of German football. But have they ever had a player like George Best? 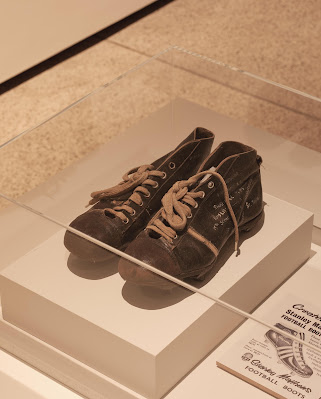 At the somewhat less developed end of the football-boot scale, you can also feast your eyes on the pair young George was given when he joined his first youth team, Cregagh Boys, in Belfast around 1960. On the sides, in white paint, he recorded details of the games in which he scored goals.

The ball has, of course, always been round, but that hasn’t stopped it being a bone of contention at times. For the first World Cup final in Montevideo in 1930, Uruguay and Argentina couldn’t agree on what type to use. Argentina supplied the one below, sewn from 12 leather panels, for the first half and took a 2-1 lead into the break. 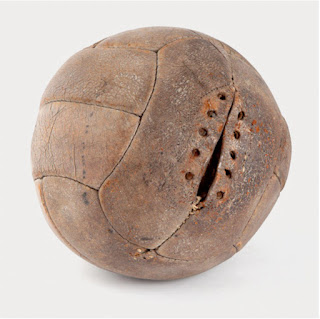 For the second half, they used a model supplied by the Uruguayans, featuring fewer but T-shaped panels. Uruguay scored three without reply to become the first winners of the Jules Rimet Trophy.

There’s an old Pathé film to show how skilled craftsmen used to turn out 20 leather balls a week by hand in the 1940s. Compare and contrast with a video showing the high-tech production process of the Adidas Jabulani ball, used in the 2010 World Cup in South Africa. High-tech doesn’t necessarily mean better, of course; goalies hated that ball because it moved about in the air so unpredictably.
It’s reassuring, however, to find that among so much change there’s one constant: the referee’s whistle. The Acme Thunderer was invented in 1884. An original and a modern version are on display, and you honestly can’t tell which one’s which.
From the man in black to the men in yellow, green and blue of Brazil, and here’s the shirt worn by Pelé from the 1958 World Cup, the first of five Brazilian triumphs. It’s surely the most iconic of football strips. 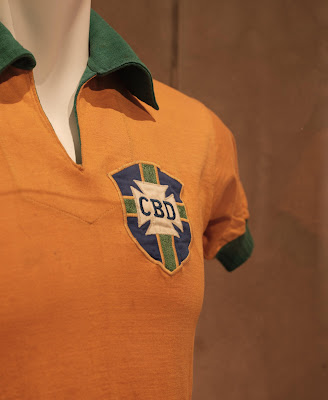 But it wasn’t always so. Brazil used to play in all white, until they failed to win at home in the 1950 World Cup, and the search was launched for a replacement. A young newspaper illustrator, Aldyr Garcia Schlee, came up with a new design incorporating the colours of the national flag, and you can see some of his sketches for the new strip alongside Pelé’s shirt.

There’s a whole wall of football shirts to identify and admire as you move through this exhibition. Pick out Leeds, Wales, Newcastle and Italy easily enough from this selection, but you may struggle with some of the more obscure Latin American teams. 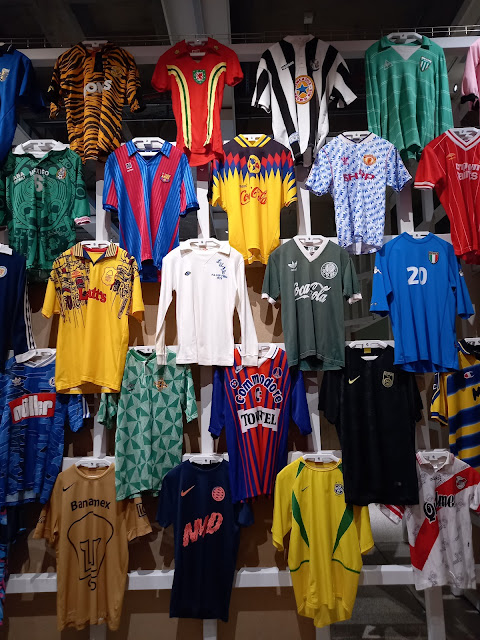 There’s a large and interesting, if less photogenic, section on stadium design. A big chunk is devoted to the work of Archibald Leitch, the Scottish architect who conceived stands in many major grounds at the start of the 20th century, including Arsenal’s old stadium at Highbury and Everton’s Goodison Park.

Astonishingly, Leitch did most of this work after terracing at his first major commission, Ibrox, the home of Rangers in Glasgow, collapsed in 1902, killing 25 people. He persuaded the club to let him build the replacement.
Before you get to the gift shop, spend a little time perusing a 1966 Littlewoods pools coupon and wondering if the Bradford derby in Division 4 might be a draw; and then head past the various table-top football games that seem to have been played almost as long as the real thing. 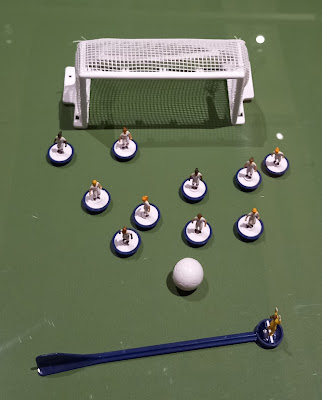 As Feargal Sharkey of the Undertones sang in 1980 about My Perfect Cousin: “He always beat me at Subbuteo/Cause he flicked to kick/And I didn’t know.” Vorsprung durch Technik.

Football: Designing the Beautiful Game is on at the Design Museum in London until August 29, by which time the new season will be well under way and your hopes for it may already be fading. The exhibition is open from 1000 to 1800 Sunday to Thursday and 1000 to 2100 Friday and Saturday, if you prefer a floodlit evening kick-off. We spent well over two hours in this engrossing show, so allow yourself plenty of time. Full-price tickets are £16.80 (£18.50 with a Gift Aid donation) and need to be booked online here.
The Design Museum is located just off Kensington High St, near the entrance to Holland Park, and it’s within a short walk of High Street Kensington Underground station on the District and Circle lines and of Kensington Olympia, which has Overground and Southern trains and a limited District Line service.